Modern application design is solved! OK, well we at least have a set of camps with their own principles, tools, and paradigms leading us toward the light. One might be “build some components, wire them up with references to each other, and let them talk to each other.” We love/hate static typing, but it allows tools to reason about really large programs.

All that is great, but I feel like plugin system design is in the wild west. To be clear, I mean dropping a new directory of code in place, performing some ritual, and the system behaving radically differently. Of course, we’re getting better at this as apps learn from each other, but I feel like our principles and tools aren’t particularly well matched to this goal of plugins being able to cooperate on a deep level to build up a system.

Most robust plugin systems solve these with event systems and some mechanism of ordering plugins to solve disputes (all unique).

A big problem is that events are almost always run-time linking based on strings. Hence it’s very difficult for tools and humans to reason about which listeners will be called, in what order, and what data will flow to each listener and be returned to the dispatching party. Ideally IDEs could sense all this stuff, and help wire up new listeners and events. Instead, devs on a plugin-heavy system must do string searching on event names or at best use some reporting tool built into the event system.

Symfony’s typed event objects and Ruby’s symbols probably help here. Drupal has a strong convention both in code and docs that helps, and is popular enough for toolmakers to focus on it. Middleware systems as in Express (node) and Stack (PHP) offer a formal way to compose applications, which is pretty exciting, but I’m not sure they solve any of the above problems of plugins tightly collaborating on processes.

What’s the future look like here, and what’s the way toward it? Standardizing on a single event system seems unlikely, but what are the best and most powerful ones out there? What language features would make this easier? Can someone stop me from diving deep into Event-driven programming literature? 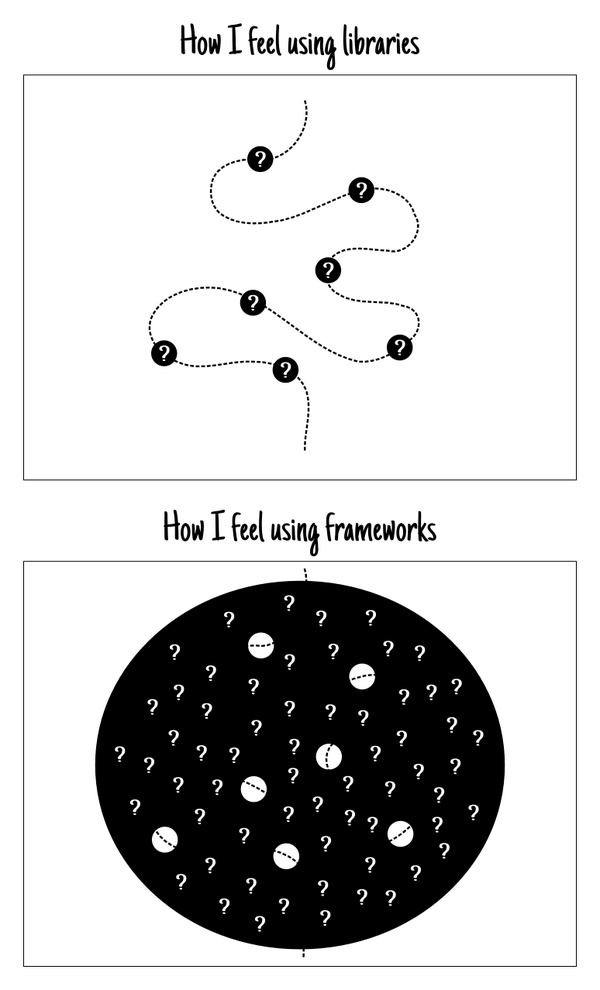 I believe this is completely accurate, in that a lot of developers feel this way about frameworks, but I don’t think it’s due to a big difference between using libraries vs. a framework. I think it’s rather a matter what kind of environments make developers happy.

Devs prefer a higher familiarity with the codebase

If you write an application “using libraries” it will always feel more comfortable. It will be crafted around your biases (your preferred configuration format and form, file layout, DI and other libraries, etc.) and it will be simple enough to meet just the use cases you foresee at the moment. Over time added features will force you to make more decisions about new components and refactoring. But no doubt you will have written a framework. Did you make objectively better decisions than those working on Framework (a public project that calls itself a “framework”), who maybe were also building on top of libraries? Maybe, maybe not, but you’ll probably feel better about those decisions, and when you look at the more complex code, you’ll remember why that code was needed and forgive the complexity.

But a new developer on this project won’t have the same biases, she’ll be overwhelmed by those complexities (which look unnecessary), and to her it will feel just like a Framework.

Code hosting sites are littered with skeleton apps built from libraries that have little or no documentation and would be difficult for a developer without the same biases to jump into. And every use case that’s had to be added has made those frameworks more complex and more impenetrable. At a certain level everything starts to look like Symfony, but frequently without the documentation and support community. An author that builds something such that the choices made were obvious may be less motivated to document it.

Large organizations maintain a variety of enterprisey apps like PeopleSoft that do 1E9 things to support 1,000s of business processes, and I feel for the folks “toiling in the Java mines” on these systems; it looks like messy, unglamorous work, and where each new feature has an impact on dozens of others. I think the sheer size of some Frameworks remind developers of these kind of nightmare scenarios.

Smaller projects with fewer use cases always enable a simpler framework around the business logic, and so any Framework that you’re not already very familiar with is going to seem like overkill. And it will be right up to the point where the project becomes complex or the original authors leave the team.

What to make of this

I guess my point is that, all code quality being equal and over time, there’s not a big objective quality difference between the framework you rolled from libraries vs the one downloaded that others rolled from libraries. But I recognize that its subjectively enjoyable to build them and to work on systems where you’re productive. And that matters.

Sorta-related aside: There’s an interesting tug-of-war dynamic between developers and management tasked with keeping a piece of software maintained. A lot of the web is geared towards hastily building something sexy and throwing it away if the product doesn’t take off, and so you want devs to create and use whatever they’re most productive in. But if you’re maintaining an internal business app that will certainly be critical for the foreseeable future—and one that devs will not tolerate working on it for long!—you have to optimize your dev processes for developer turnover, while simultaneously trying to keep them happy. Introducing any technology with a potentially short lifespan introduces big risk.

Despite the scary name, the concept is simple: Your class or function should ask for dependencies upfront. It should not reach out for them. This gives you a few powerful advantages:

1. In unit tests you can pass in mock dependencies to verify/fake behavior.

Imagine your class depends on a database. You really don’t want to require a live database to run your tests, but also you want to be able to test a variety of responses from the database without running a bunch of setup queries. What if your logic depends on the time being around 3AM? You can’t reliably test this if your object pulls time from the environment.

2. Your API doesn’t lie to users about what’s really required to use it.

Imagine if you started cooking a recipe and step 7 read, “Go buy 10 mangos now.” Imagine a Skydive class whose jump() method waited 10 seconds then executed Backpack.getInstance().getParachute.deploy(). “Umm, I’m in the air and the Skydive class didn’t tell me I’d need a backpack…”. Skydive should have required a parachute in the constructor.

Imagine a function getNumDays(month). If I pass in February, I usually get 28, but sometimes 29! This is because there’s a hidden dependency on the current year. This function would be useless for processing old data.

Baking the dependencies in

Note that the same principles apply to functions (fine for this exercise, but you should avoid global functions/static methods for all sorts of reasons). Consider this function for baking peanut butter cookies:

From the argument list, it isn’t clear you’ll need a large Publix egg on hand. What if you don’t have a Publix in your area? What if you want less sugary cookies? Let’s refactor:

Now it’s immediately clear at the top what ingredients you’ll need; you can use any brands you want; and you can even change amounts/sizes to yield all kinds of flavors. This is really flexible, but we can make it even better:

In case it wasn’t obvious, it’s now clear we’ll need a chef and oven, and it makes good sense to outsource the oven design because this logic isn’t really specific to peanut butter cookies. A sign that our refactoring is going well is that the function body is starting to read more like a narrative.

We’ve refactored into several easy-to-test components, each with a specific task. This function is also easy to test because we just need to verify how the dependencies are passed and what methods are called on them. If we wanted to go even further we might notice that cookies come out differently in Denver vs. NYC (there’s a hidden dependency on altitude).

But that’s all dependency injection is: asking for what you need and not relying on sniffing dependencies from the environment. It makes code more flexible, more reusable, and more testable. It’s awesome.

I highly recommend Miško Hevery’s 2008 talks about dependency injection and testability, which really solidified the concepts and their importance for me. [This is an improved version of an article I wrote around that time hosted elsewhere.]

There’s no perfect way to develop software and use source control because projects, teams, and work environments can vary so much; what works for a small office of employees might not for a loose group of part-time contributors spread across many timezones, as many open source projects are.

Jade Rubick is not a fan of long-running feature branches in git and—if I’m reading this right—argues for merging into master frequently, not waiting for an entire feature to be implemented. This is supposed to force the team to be aware of all code changes occurring.

While lack of communication about features in development can certainly be problematic, I think this is a sledgehammer of a solution. Taking this approach to its extreme, it might make sense to have all developers work huddled together so they can say what they’re working on in real-time, or all work on one workstation. My point is that using a workflow with high costs to address a communication deficit is not so great an idea.

My big fear of this workflow is that it eases the flow of incorrect/unwise code into production. Who reviews this code? What if it takes the whole codebase in a bad direction, but no one at the moment has time to realize that? I think the benefits of feature branches/pull requests are just huge:

All workflows have costs/benefits, I just think that the benefits of not merging feature branches until they’re really ready are huge compared with the costs Jade described.

My hunch is there must be better ways to keep a team aware of other work being done on feature branches. E.g. Make pull requests as soon as the feature branch is created and push to it as you work. That way team members can set aside time to check in on pull requests in progress and provide feedback.

I agree with Jade that feature flags can be a great idea, but that’s mostly orthogonal to source control workflow.